Delivering a laudable debut with ‘Aambala’ and later followed by ‘Thani Oruvan’, Hip Hop Tamizha has been offering something more sensational through his musical journey. Now he has teamed up with Sundar C second time for a movie titled ‘Aranmanai 2’ and we bring you the exclusive music review of this film.

It’s obvious that the film will have this placement of song by the end of film, where the characters call out for the divine intervention to cast out the devil. Although the song is over louder in few parts, it could be enhancing the emotional feeling with the grand set works and situational placement with more than 1000 dancers involved in the song. Malathi has been the right choice to emblazon the emotional call.

What begins as a fabulous number with the effect of ‘Child’s Play’ factors, but in next few minutes it transports into noisy loud factory of heavy metals and lots of strings. It gets too gaudy behind the limits and perhaps with the visuals, it could bring out something more beneficial.

This singer has been capturing the markets with an impeccable style and this album brings him up with a similar style of his usual panache. The instrumental parts are too loud that we fail to grasp the clarity of the singer.

When you listen to this song, it sounds like something based on majestic arrival of a reigning princess or queen as her spouse awaits to honour her. It starts off well with some spellbinding aspects, but Kailash Kher could have been replaced by some other singer.

Party with the Pei

This song has been getting all the spotlights from the time; it was released as single track promotional video. Just imagine, three hot belles – Trisha, Hansika Motwani and Poonam Bajwa scorching up with their sultry looks for this song along with Siddarth. The rap by Hip Hop Tamizh in the interludes is yet another embellishing element.

Transparently, the song reminds us off Hip Hop Tamizha’s yesteryear independent album ‘Vaadi Pulla Vaadi’ and the song travels on a much decorous note. It could get more enhancements through the visuals.

Overall, Aranmanai 2 has two songs – ‘Party with the Pei’ and ‘Poraada Poraada’ is catchy and more engrossing while rest of the songs could get elevated through the promotions and visuals.

Verdict: Moderate effort, but not the best from Hip Hop Aadhi 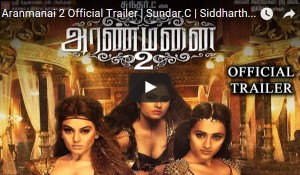