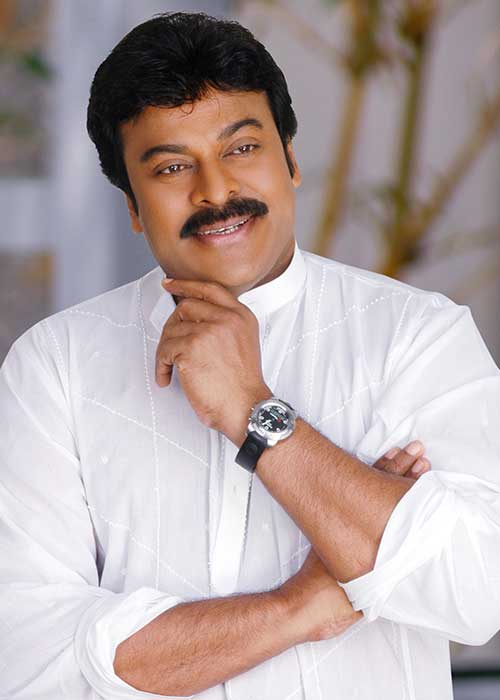 Chiranjeevi (Telugu: చిరంజీవి), is a popular Tollywood film personality. He has received the Padma Bhushan award, the second highest padma award bestowed by the Government of India. He is the only Tollywood actor to receive seven Filmfare Best actor awards. He announced his formal entry into politics on August 26 and founded the political party named Praja Rajyam

Vara Prasad is the son of Late Sri Venkat Rao and Srimathi Anjana Devi. He was born on 22 August 1955 in Mogallturu,a town on the Banks of River Godavari in the West Godavari District of Andhra Pradesh in India. His father worked as a constable and got transferred on a regular basis. He spent his childhood in his native village with his grand parents.
He has two sisters and two brothers. His younger brother, Nagendra Babu is a film producer and a actor. His youngest brother, Pawan Kalyan, is also a actor. Chiranjeevi did his schooling in Nidadavolu, Gurajala, Bapatla, Ponnuru, Mangalagiri and Mogalturu. After high school he studied in C.S.R.Sharma Junior College at Ongole.
He then graduated from Y.N. College in Narasapur with a B.Com degree. He is an NCC cadet.Chiranjeevi had participated in the Republic Day Parade in New Delhi as an NCC cadet in the early 70s. In 1977, after his graduation at Y.N. College in Narsapuram, Chiranjeevi moved to Chennai to seek a career in acting.

Chiranjeevi’s foray into politics was highly anticipated in the media and political circles since 2007. While it was reported that he was seeking opinion of people during the latter half of 2007, the media also suggested that he would announce the decision in January 2008. Even before the party’s launch, several political leaders from the Andhra Pradesh such as Harirama Jogaiah from Congress Party and K. Vidyadhar Rao , B. Nagi Reddy , Tammineni Seetharam , Ganta Srinivasa rao and many more from the Telugu Desam Party openly declared that they would join the party.

On August 26, 2008 in the public meeting held at Avilala near Tirupati, he announced the party name as Praja Rajyam saying the Rajyam (Rule) belongs to Praja (People). He unveiled the party flag in this meeting.

He will start his maiden political yatra from the north coastal Srikakulam district in Andhra Pradesh on October 10.